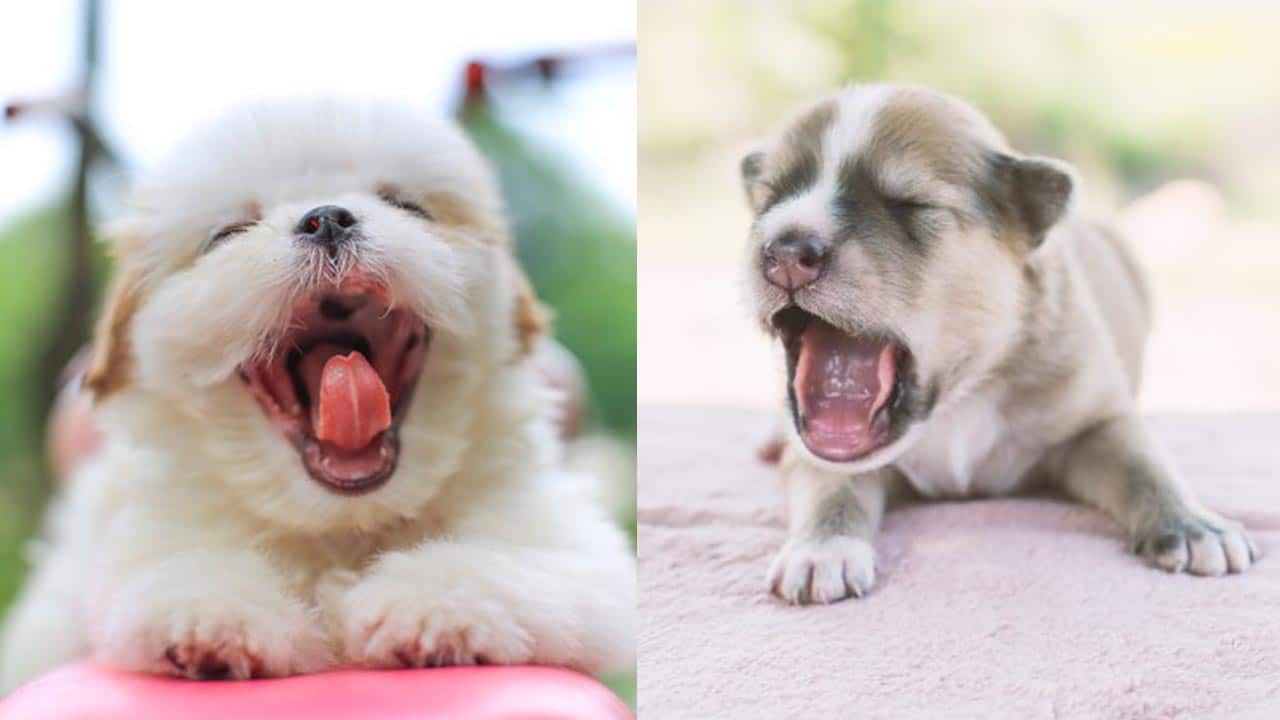 This is the way to express their emotions, intentions, and thoughts through their physical and bodily movements.

The body language is the interpretation of the posture and the behavior of dogs.

This kind of verbal communication is used for the identification of the emotions and intentions of dogs and is widely applied to the wild canines as well as domestic dogs.

Studying the body language of the dogs is essential to prevent dog bites, especially for the safety of children.

This non-verbal form of communication occurs between the dogs and humans and is a sort of interaction between the two.

The movements in dog body language include the movement of the tail, the ears, the head and body, and much more. 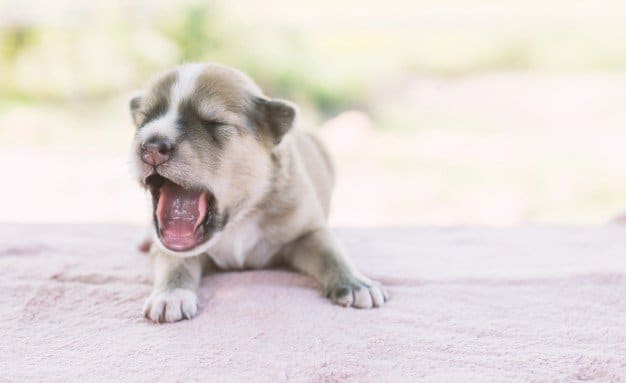 The wagging of the tail is the most common body movement that is used by dogs to communicate with their owners and people who surround them.

Also, flattening of the ears and moving them is another typical move made by dogs who want to communicate with their owners.

Contents show
How do dogs communicate?
Understanding the Body Language of Canine Yawns
What is yawning in dogs?
What are the reasons behind dog yawns?
Dog Anxiety and tension
Confusion
Communication with strange dogs
Related posts:

How do dogs communicate?

Dogs have a special way of communicating, which is why it makes it so difficult for humans to interpret their actions and behavior.

All these emotions cause varied types of bodily actions stating their emotional state.

Humans who can properly communicate with dogs and understand their every action and whatever they are doing are often called a dog whisperer.

They can talk to dogs non-verbally and communicate with them effortlessly.

Read -  How to Train Your Dog to Listen to You

By properly understanding the body language of the dogs, you are not only able to know what the dog is trying to tell, but also, you are able to recognize the warning signs if the dog is set to attack.

This can help in reducing dog bite occurrences.

Body language experts who study dog movements can understand hostile and cheerful behavior and also decipher the underlying reasons behind their actions and behaviors.

Understanding the body language of dogs can also help in optimal obedience and training in the dogs and would assist in motivating good behavior in dogs.

It will make dogs smarter and better. 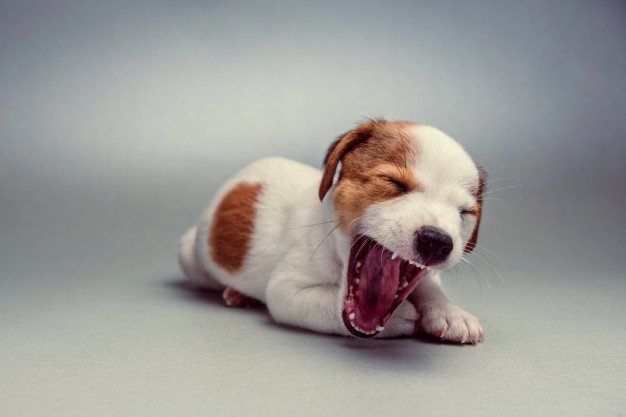 Yawning is one of those actions. It is considered to be a form of body language in dogs that has a specific meaning attached to it.

If you have a dog and he is constantly yawing, there is a good chance that he might want to communicate with you.

What is yawning in dogs?

Yawning in dogs is similar to yawning in humans.

It is a wide-open jaw accompanied by a huge deep breath. People who experience fatigue are likely to experience yawning.

However, in dogs, it could be any other form of communication, and there could be a different emotion or feeling attached to it.

This is a kind of a conciliation gesture. In many cases, this is a sign of calmness and peace in dogs.

In some cases, though, yawning could be a sign of a threat. When a strange person or dog approaches, a dog may look away and yawn.

This is the sign of stress or the feelings of anxiousness or threat. This is the dog’s way of telling that he will not attack, but he feels threatened and is trying to avoid conflict.

Read -  How to House Train an Older Dog?

This may also happen if someone hugs the dog or scolds him and other stress-inducing situations.

You can even avoid such behavior in dogs by not putting them in such a situation where they might feel threatened.

Knowing this kind of behavior will improve your relationship with the dog and assist in training. 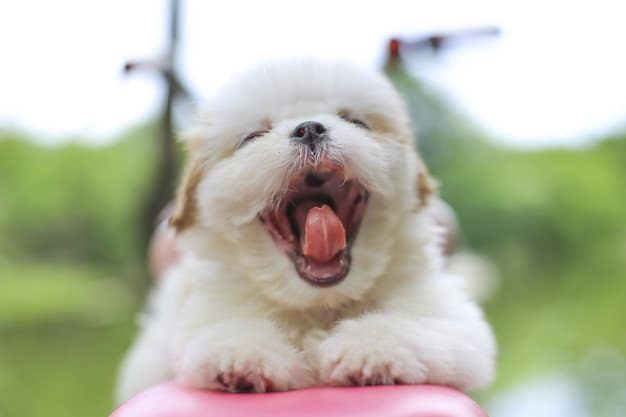 What are the reasons behind dog yawns?

People yawning and dog yawning different cause reactions in people.

A dog yawn is considered to be cute and adorable and often interpreted as a compliment.

So in case you grab your cardigan and wear your shoes and get ready to take your dog out for a walk and he yawns, this doesn’t say that the dog is unexcited and unwilling to go.

It could actually mean that they are excited to go out and explore. Yawn could also indicate impatience and anticipation in a few dogs.

Other than the excitement and thrill and anticipation, yawning in dogs could also be due to negative and troublesome emotions.

A yawn could be due to stress and tension.

This type of yawn is accompanied by other bodily signs such as flattening of ears, licking the lips, wide-eyed stares, and tenses muscles.

This indicates the dog is uncomfortable in a certain situation.

While humans resort to nervous habits like chewing nails, tapping foot, and touching the hair when they are under stress and nervousness, a yawn could interpret the same emotions in dogs.

Read -  How to Stop a Dog from Pooping in the House?

This is the sign that tells that something isn’t right with them, and the owner must help out the dog. 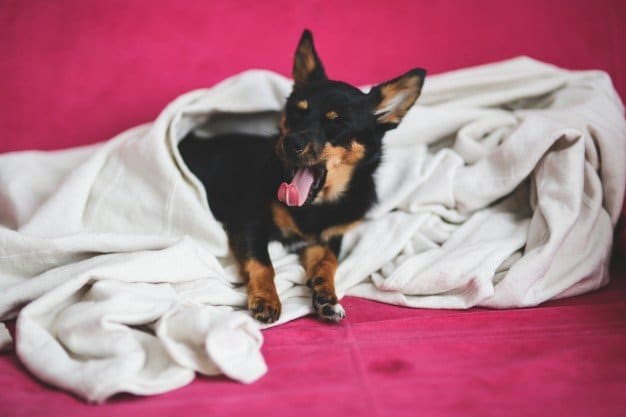 Confusion and puzzlement can also lead to dogs yawning and licking their lips.

This generally happens in the training sessions when the dog doesn’t know and understand what to do, so they yawn as an indication to tell the owners that they are confused.

This could also mean that they are bored with the confusion.

In such cases, something must be done to make the dogs understand what is going on and not to keep them in such a situation to stop this behavior.

Moving the dog away from that situation and indulging him in some different training exercises will keep the training going.

This happens when dogs are introduced to unfamiliar that they do not know.

They always see strangers as a sign of threat, be it humans or their species. Yawning could be a sign that could either say they are trying their best to stay calm and unaffected by someone’s presence.

It could depend on the dog to dog. If you wish to interact with a new dog, try yawning at them as it is a way of letting them know that you are in peace with them and do not feel threatened by them.

Many studies have also suggested that yawning is contagious in dogs just how it is in human beings.

Dogs are also prone to contagious yawns like humans and experience it sometimes due to no reason at all.

If you want to try this with your dog to prove this theory, go on and do it.

Understanding Dog Body Language: Lip Licking
How to House Train an Older Dog?
7 Warning Signs That a Dog May Bite
How to Potty Train a Puppy on Pads?
Share
Pin
Tweet 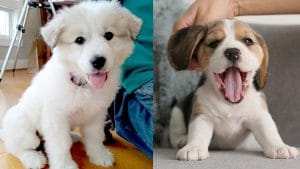 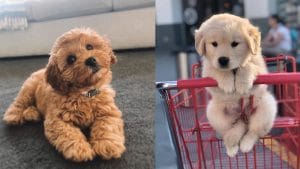 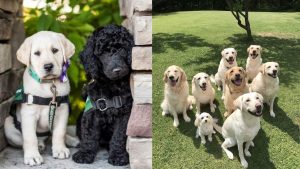 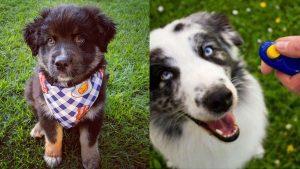 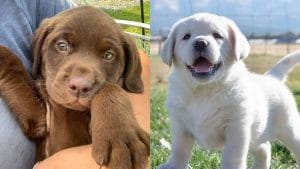